In this article, we present you 15 amazing car museums, from all around the world, that you should visit if you’re a petrol head. Enjoy!

This museum is the American home of French Art Deco. Peter W. Mullin said the French automobiles of the ‘20s and ‘30s represent the pinnacle of the 20th-century art and design, and he is the one who founded the museum. It features more than 140 examples of real-life car art, while the core of the collection is the forgotten French coachbuilding art, which produced fine cars for Delage, Bugatti, Delahaye, Avion Voisin, Hispano-Suiza, and Talbot-Lago. A lot of these won the Concourse de Elegance Awards.

Although not the most significant car museum in existence, it houses 520 cars from 98 brands and has the largest Bugatti collection in the world, totaling 123 vehicles. Out of the 7 Bugatti Royale models ever built, this museum holds 3 of them. There are three sections of the museum, the Motorcar Experience, the Motor Racing that features pre-war GP cars, and the Motorcar Masterpieces. If you are interested in buying or even selling car like those ones, check out Hyman Ltd.

Robert Petersen and his wife Margie founded this car museum, and it is one of the largest. Following a lengthy and extensive renovation, the building now has 25 galleries with around 150 cars. These include expensive cars, celebrity vehicles, historic roadsters, priceless racecars, and exquisitely designed automotive machinery. Some of the examples are Elvis Presley` De Tomaso Pantera, many of the famous BMW art cars, iconic Ford GT 40 Le Mans cars, classic Porsche models, etc.

This is one of the best car museums on the list, and probably the most significant car collection in the Netherlands. Louwman Museum holds one of the most extensive selections of microcars in the world. Therefore, if you like classic quirkiness, do not look anywhere else. The museum also holds cars like the prewar Lagonda racecar, the stunning BMW 328 roadster, the Lancia Astura Pininfarina, a few Bugattis and Maseratis, the Martini livered Le Mans Lancia-Abarth, the 1932 Ford Deuce Coupe hot rod, and even a Trabant model.

It will take you around 90 minutes to tour this museum, dedicated to the Mille Miglia competition. The local Brescia entrepreneurs, united in the Amici Della Mille Miglia foundation, started the museum in 1996. Since then, they have managed to develop partnerships with other collections, like the Mercedes-Benz museum. This museum holds Ferrari, Maserati, Lancia, Jaguar, Mercedes, BMW, FIAT, Porsche, Bugatti, Alfa Romeo, and Austin cars, as well as many others.

If you ever end up in Leicestershire, England, make your way to the Donington Grand Prix Exhibition, a museum complex of five halls, located at the racetrack of the same name. The museum holds cars from many different open-wheel single-seat racing series, but of course, it mainly focuses on the Formula 1 cars. It displays the only complete collection of Vanwall cars in the world and an almost complete McLaren F1 collection. There is also the Stirling Moss`s winning Lotus present, as well as racing cars driven by F1 legends Fangio, Nigel Mansell, Graham Hill, James Hunt, Michael Schumacher, Fernando Alonso, Jim Clark, and Ayrton Senna.

This is one of a small number of museums located in a historic part of a large city. Autoworld owns a varied collection of more than 250 vintage American and European cars from the late 19th, all the way until the 1970s. It also holds lesser-known Belgian car brands like Belga Rise, FN, and Minerva. Autoworld Museum is a perfect opportunity to meet the extinct car culture. There are also epic classics present in the museum and it offers a great collection of the automobile history. Some examples are Alfa Romeo 8C, Porsche Slant Nose, Dodge Viper SRT, Amphicar, BMW 3000 CS, Ferrari Testarossa, Lotus Elan, and several concepts like the Nasca Aztec, and the concept that became the Audi A2.

Iran is not among the popular tourist destinations, but thanks to the love for cars of the exiled Shah of Iran, there is a major collection filled with Rolls Royce, Ferrari, Mercedes, and Maserati cars. There is a legend claiming how the Shah loved driving these unique cars during the night on the streets of Teheran. Unfortunately, he was forced to abandon the collection of some 1200 cars. Today, around 200 of them are displayed at the National Car Museum, while the rest are locked away in the museum warehouse.

Ion Tiriac is the richest retired athlete in the world, and his collection of cars is extraordinary. The Tiriac Collection houses 250 cars and motorcycles, while the oldest was manufactured in 1899. This amazing collection also has vehicles from more than 30 brands, including Rolls Royce, Ford, Cadillac, Ferrari, Aston Martin, Jaguar, Harley-Davidson, Indian Scout, and others. Furthermore, this is the only private collection that has all Rolls Royce Phantoms that came before the year 1972.

This independent car museum is located in Turin, in the northern part of Italy. It houses a collection of almost 200 cars by 80 brands. Of course, Italian beauties dominate the collection, with the biggest accent on racing cars like Lancia, Alfa Romeo, Cisitalia, FIAT, Lamborghini, Ferrari, Maserati, Isotta Fraschini, and Autobianchi. In addition, it is close to Lingotto where FIAT has its main production facilities.

Royalties also have great taste in cars. Prince Rainier III of Monaco is not an exception, which can be seen at the Monaco Top Cars Collection. It is full of incredible vehicles restored to absolute mint condition. There are five levels of exhibit space, overlooking the Terrasses de Fontvieille. This is a must see site for all car fans because it displays the Bugatti Type 35 driven by William Grover-Williams, who won the first Monaco Grand Prix in 1929. Opposite of this is the Citroen DS3 WRC that led Sebastien Loeb to 1st place in the 2013 Monte Carlo Rally. There are also motorless carriages, luxury limousines, racing cars and all kinds of automotive beauties from top brands. 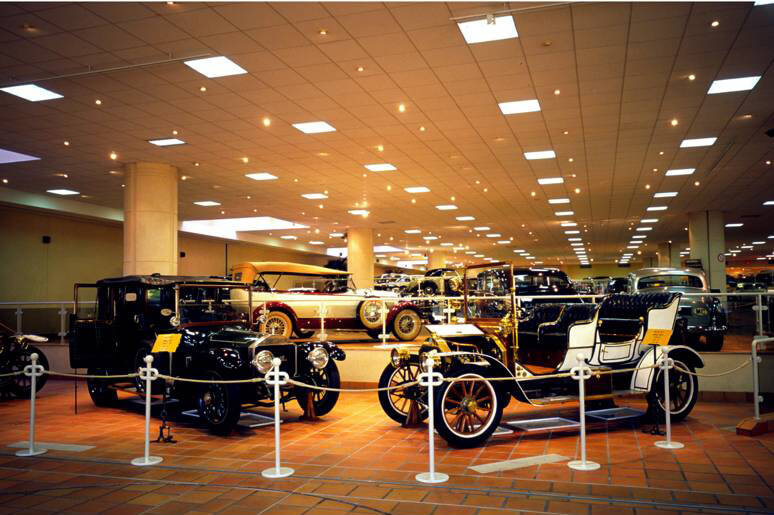 Juan Manuel Fangio is one of the biggest legends in the motorsport world. The museum in Balcarceee, Buenos Aires is just a few blocks away from where he was born. It opened back in 1986 and Fangio was present at the ceremony. It houses 50 cars, many trophies, photographs and other memorabilia from his rich career. You can see a McLaren MP4/3B, the first McLaren chassis powered by Honda. There is also the MP4/10 driven by Hakkinen, during the 1995 F1 season. Furthermore, there are cars like the Mercedes-Benz W196, Alfa Romeo Tipo 308, Maserati 250F, Lancia-Ferrari D50, and Mercedes C111.

Aussies are very proud of their car culture, preserved in their National Motor Museum in Birdwood, South Australia. The venue was established in 1964 as a private collection, which the South Australian Government bought some 10 years later. By going there, you can see the Shearer Steam Carriage from 1899, and only a couple of years older Peugeot Type 17. Then there are cars like the ancient De Dion-Button, 1914 Dixi R12, 1910 Daimler Landaulette, 1925 Rolls Royce with Vanvooren bodywork, 1919 Lincoln Six Tourer, 1959 Chevrolet Bel Air, 1956 Land Rover S1, a bunch of Holdens and Ford Falcons, and a lot more.

This museum focuses most on the postwar German racing cars, and it is located in Hamburg, the Speicherstadt district. It is really like a chest full of motor world treasures. Opened in 2008, it holds the Porsche Type 64, the ancestor of the famous 356. Only three Type 64 were built and used by the Nazis and their propaganda from Berlin to Rome. They have one of the two reaming models. The first F1 car driven by Michael Schumacher, the Jordan F1 191, is also present here, as is the Porsche 356 driving simulator. The museum also offers an in-depth look at the careers and private lives of Otto Mathe and Wolfgang von Trips. A photo-exhibition, as well as a wind tunnel, are also available for the visitors.

Museum of the 24 Hours of Le Mans, France

The highest level of motorsports competition really deserves its own museum, which you can come across at the Circuit de la Sarthe. You will not be disappointed at all if you decide to visit this place, as Le Mans history is rich with amazing supercars. A number of French racers dominated the competition during the ‘20s and ‘30s, like Chenard and Walker, Lorrain Dietrich, Bugatti, Delahaye, Talbot Lago, and others. There are modern-day endurance racing cars present here, like Audi R18 e-Tron Quattro, the rotary Mazda 787B, and the Porsche 917 LH. In addition, you can see the Bentley 3L Sport Torpedo Vanden Plas, which won the competition in 1924, and the Ferrari 166MM that is identical to the one that won the iconic race back in 1949.

5 Questions To Ask When Hiring A Digital Marketing Consultant