Sooner or later, in one form or another, nature calls out to us. All outdoorsmen are innately more vulnerable to that call and begin to hear it early on. Animal lovers stand no chance of ignoring it, as the voice of nature is no abstract concept to them. They hear it in the bellowing, snorting, growling, roaring, squeaking, and bleating of the nature avatars scattered across the planet, living side by side with us. Hunters hear the same call in a different orchestration and respond to it with a melody of their own, as primordial as nature itself. Two sides of the same coin, we keep seeking balance, flipping in an endless search. We might have studied animals from top to bottom, classified them, and learned their habits, but, despite our self-proclaimed omniscience, they remain a mystery unsolvable to us. We may know what they are, but do we know who they are? That enigma we can only observe. Our best chance of comprehending it lies in coming as close as possible to feel its breath and look it right in the eyes. No screens, creating an illusion of proximity, no bars keeping you apart. Only you and the animal right in front. That is what safari is, an experience unlike anything else, unique in its bonding character.

Now then, with the hope we’ve managed to carry you away in the realm of images for even a fraction of a second, we proceed to the down-to-earth part of the article. Safari trips. They are fun. They grant you a rare opportunity to see wild animals roaming their natural habitats with your own eyes. With no pause buttons and frames, no distancing cage bars, and souvenir shops being constant distractions, you can finally pay your undivided attention to what’s going on around you. The overland journey to observe African wildlife is an experience hard to forget, even if you actively try. As you might guess from how the word sounds and what it means, safari is an African thing in that regard that it’s about African animals and landscapes. Consequently, the best safari parks are located, unsurprisingly, in Africa. That’s a long journey, and not one of the cheapest ones, truth be told, but who said that memorable experiences are easy to come by? If you nonetheless don’t feel particularly enthusiastic about traveling to another continent, there are safari experiences to be found within the boundaries of the U.S. If you are a hunting enthusiast who stopped googling gun stores near me after having learned them all by heart, and seek to bring diversity to your hunting life, you can very well stay in America. There are safari parks and ranches that specialize in African game hunting experiences. Yet, for a genuinely African safari, you’ll have to cross the ocean. Here’s a short list of the best safari parks in Africa and worldwide. All trophy hunters might pack their hunting rifles with them, given they are ready to work with hunting outfitters. 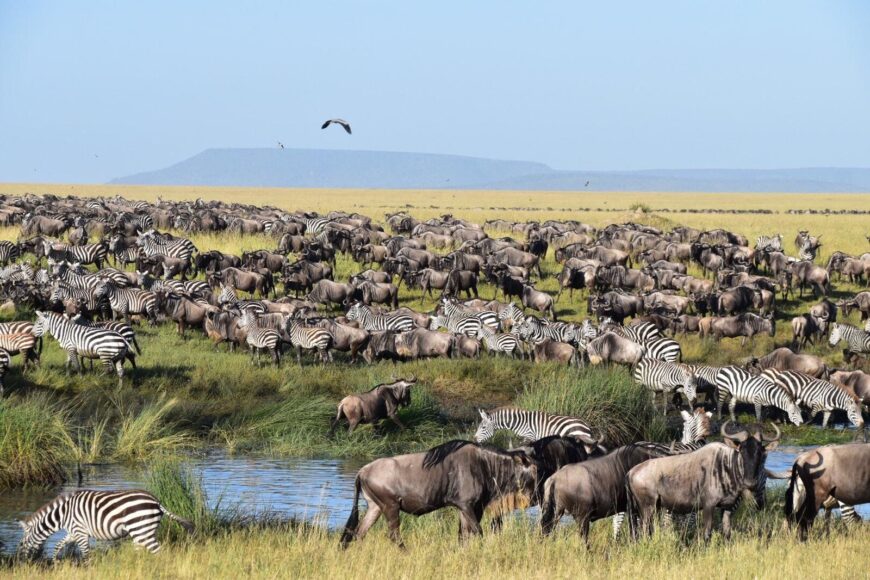 Serengeti National Park is the crown jewel of the African safari world, having won the title of the Best African Safari Park several years in a row. With 30,000 square kilometers of rolling plains and vast grasslands, Serengeti National Park is one of the oldest ecosystems that managed to remain unscathed through millennia, surviving several attempts to change that fact. If you try to summon the image of Africa in your mind’s eye, you’ll probably end up imagining this park, since Serengeti was featured in a myriad of wildlife movies. The mosaic of its unspoiled natural splendor comprises several large pieces. The first one depicts Africa’s Big Five: a lion, leopard, black rhino, African bush elephant, and African buffalo. The representatives of charismatic megafauna can be seen freely roaming park expanses. The next piece houses a group photo of the Serengeti’s rich fauna. Cheetahs, African wild dogs, hyenas, crocodiles, giraffes, zebras, and hippos wander the land, while more than 500 hundred bird species roam the blue sky. The third piece is a broad panorama of African landscapes, vibrant in colors and strong in their perseverance. The last piece opens a portal to one of the world’s natural wonders: the annual Great Migration. Millions of wildebeests, zebras, gazelle, and antelopes cross the Mara river in search of pastures with more greenery. Their journey leads them to the Masai Mara region of Kenya, which also happens to be our next destination. 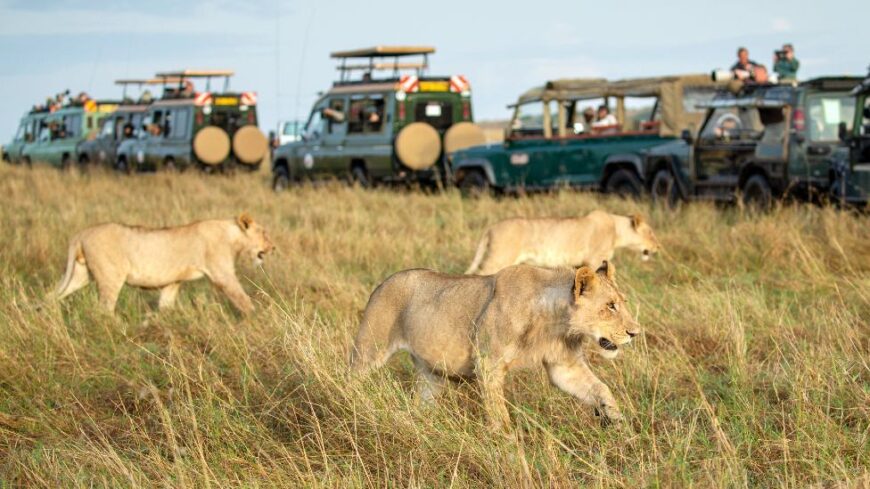 Masai Mara Natural Reserve is not nearly as big as Serengeti, but this fact doesn’t prevent it from being Serengeti’s main competitor for the title of the number one safari park. Originally spelled as Maasai Mara, this game reserve, located in the southwest of Kenya, is named after the ancestral inhabitants of the area, the Maasai people. It is one of the most important wildlife conservation areas in Africa that also cherishes the culture of the indigenous tribes. The area teems with life, especially in the time of the Great Migration when millions of hooved wanderers come from the Serengeti National Park. The reserve houses all the iconic African species you might hope to see on your safari trip. The members of the Big five can be spotted here all year round, large groups of hippopotamuses and crocodiles are found in the Mara and Talek rivers, and countless species of carnivores roam the savannas in search of prey, whereas that very prey grazes in pastures. Truth be told, the local fauna is very similar to that of the Serengeti National Park, but the landscapes and cultural context are different. A true treasure trove of African wildlife observation opportunities. 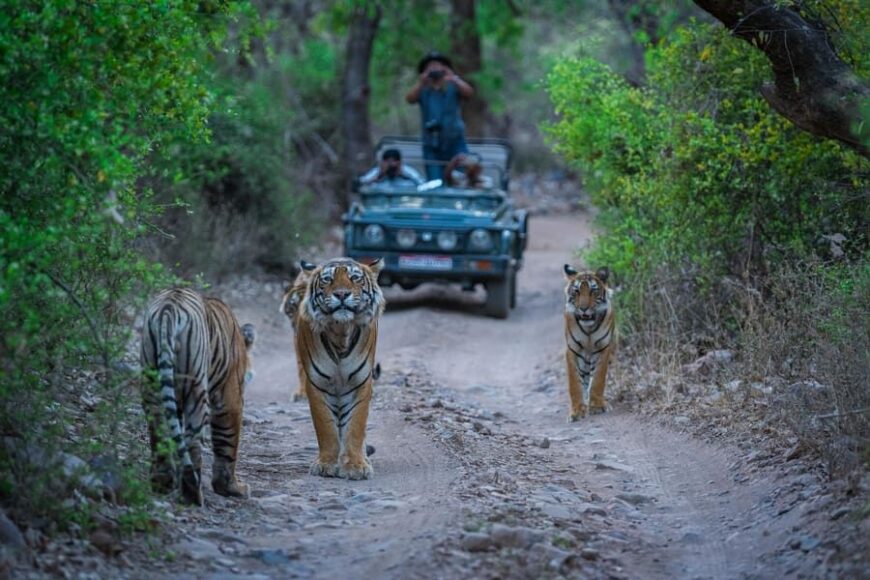 Though two African safari spots would hardly satisfy the inquiries of passionate outdoorsmen, we want to show that Africa is not the only place for safaris. Besides, the places mentioned above will give you a complete picture of what a genuine African safari experience is, so we decided to leave some space for slightly different experiences. Who would miss an opportunity to see a tiger roaming its natural habitat? They are as worthy of our interest as lions and leopards, right? Well, if you want to see a tiger, Africa is not your destination. As of now, India hosts the largest tiger population in the world, and Ranthambore National Park is one of the best places in the world to observe these magnificent animals. The area was designated a national park in 1980, after seven years in the status of a tiger reserve. What started as 60 square miles of a tiger sanctuary grew into a national park housing miles of deciduous forests and open grassy meadows, inhabited by dozens of animal species. In addition to the famed tigers, you will also see leopards, Indian elephants, striped hyenas, sloth bears, wild water buffaloes, spotted deer, as well as a wide variety of birds and reptiles. The local fauna is quite different from the African one, but that doesn’t make it less beautiful. 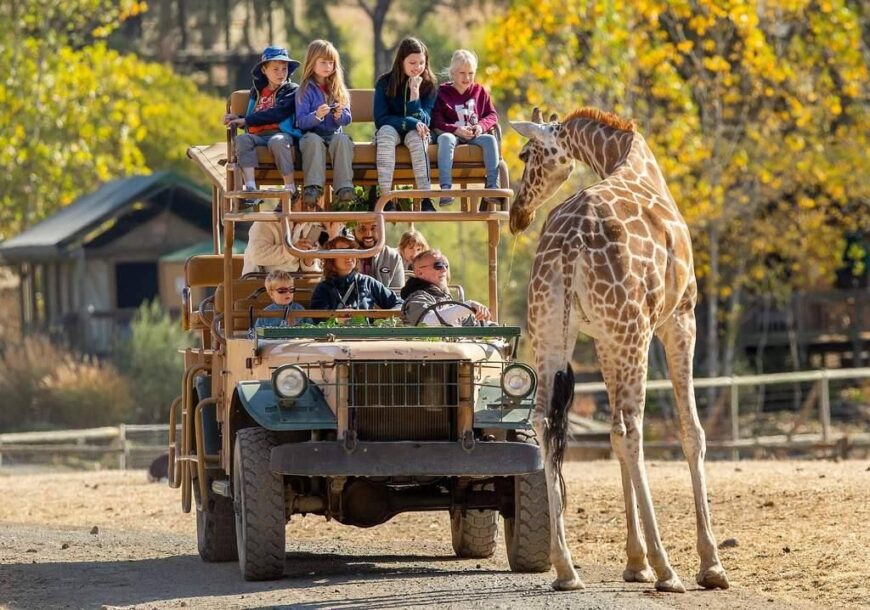 Do you really need to travel to the other side of the world just to see a giraffe or a rhino? Not necessarily, traveling across the country might do the trick. Safari West gives you the opportunity to find a small piece of Africa hidden in the heart of the wine country. Cheetahs, hyenas, fennec foxes, giraffes, rhinoceroses, oryxes, and antelopes will make you forget you are still in America. A genuine African safari experience is complemented by the presence of other exotic animals like lemurs, de brazza’s monkeys, and flamingos. If you are only considering a safari adventure and want to dip a toe into the world of African wildlife, this might be an excellent place to start. If you like it here, then a trip to Africa might be a bold next step.

Is It Better to Book a Cruise Online or Over the Phone – 2022 Guide?

Where Is The Hottest Real Estate Market In North Carolina 2022?

What is Wealth Management?