‘Virtual fitness’ is a concept that’s been around for decades. It is loosely defined as the art of working out on one’s own time, quite likely in the comfort of one’s own home, with the guidance of online sources. These sources usually come in the form of workout videos.

Virtual exercise essentially combines technology — hence the usage of the term ‘virtual’, in case it wasn’t already obvious — and physical exercise. Many people give plenty of excuses not to exercise: they’re either too busy, too ‘broke’ to go to the gym, or too tired.

But with the introduction of virtual health, people are finding it more convenient to work out.

A good example of virtual fitness is when workout videos are played on the big screen in gyms. Back in the 90s and early 00s, exercise DVDs were also frequently played at home.

While virtual workouts aren’t a new concept, they’ve gained a lot of popularity in recent times. The COVID-19 pandemic has forced us all to retreat into our homes for a lengthy period. And during those days, many resolved to not let physical restrictions confine their fitness.

Why Virtual Fitness is Becoming the Norm

Today, virtual fitness has become a reality for all of us. And there’s good reason to believe this trend is here to stay.

Of course, gyms are still very much an option for many exercise lovers. People are also slowly returning to the norm of playing sports outdoors. But although the public is once again getting used to the conventional ways of exercising, virtual fitness has gained a permanent spot in many people’s routines.

Perhaps one of the key reasons why people opt for virtual exercise is that it provides a more affordable way of getting guidance while they strive to keep fit.

There are plenty of fitness apps that one can download through a simple tap on their smartphone screen. They’re getting so popular, in 2019, it was reported that about 39% of the existing apps were geared towards health and wellness. These apps provide nifty tips and reliable routines upon which a person may base their fitness plans.

“When someone tries something new, they are vulnerable. They need support,” said Kim Constable, founder of The Sculpted Vegan. The Sculpted Vegan provides an app under the same name which gives its users some guidance on how to go about their vegan-based bodybuilding plans.

Constable very aptly pointed out that fitness apps help people when they feel, as she puts it, “vulnerable”.

Nobody wants to go about wrecking their body or getting injured when they attempt a new fitness routine. Whether it’s a new diet or a new workout routine, nobody should be delving into anything without first doing their due diligence. Research is key. And that’s precisely why fitness experts have turned their attention to providing related information on fitness routines online.

Too busy? Too tired?

You don’t have to take much time; just find a workout video online that spans the duration of one’s available time. Some YouTubers like POPSUGAR, blogilates, and MadFit make workout videos that are either as short as the duration of a song or as long as half an hour to an hour. And, of course, there’s always the pause button for whenever one gets distracted.

Working out at home is also a popular option for many because of how much more hygienic it is. Especially after the pandemic hit, gyms and sports centers have been advised to take greater care in disinfecting their equipment. But still, some are wary. The concern still lingers for the more cautious, since there are so many people who use the available equipment and then pass them on to the next waiting person.

For beginners who are a little nervous about trying something new in public, they’re free to try out new exercise classes in their own homes.

This is especially true for people who want to learn how to dance, but have two left feet. For example, Nathan Short, founder of Move With Colour, often says phrases such as, “Like nobody’s watching,” during his online dance tutorials.

And with a virtual instructor or an app that sends daily reminders to work out or keep to one’s diet, it becomes easier for someone to be consistent. Virtual work out programs can often work like a physical trainer in some ways. 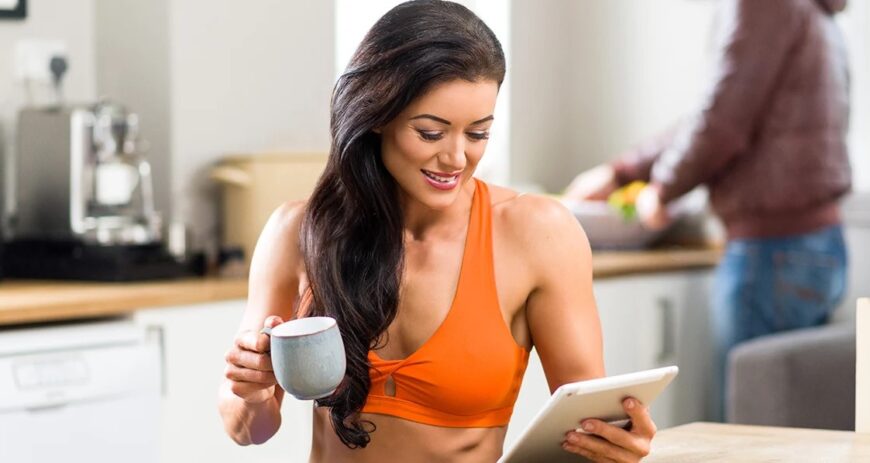 Virtual fitness also gives people the opportunity to connect with a community. Whether it’s with a network of like-minded people going down the same road or an exercise guru, virtual exercise programs keep people connected.

After all, isn’t that the way all things virtual work? The internet brings us closer together. It connects us with people from all over the world who are going through similar stages in life.

It’s the same with virtual fitness. A prime example would be Kim Constable’s subscription-based app under The Sculpted Vegan.

“Like other social media platforms, there will also be the ability to upload different types of media, progress pictures, comments, likes, and shares,” Constable explained. “You’re not just pulling information off a bland website; you’re interacting with a like-minded community of fitness devotees. People who can motivate and inspire you.”

“I’d been a vegetarian for almost 16 years and the year before I decided to start training, I went full vegan,” she said. “However, my trainer couldn’t advise on my nutrition because a vegan diet was uncharted waters for him.”

Many can surely relate. Different bodies adapt to various fitness plans differently. Take, for example, women with polycystic ovarian syndrome (PCOS). Influencers like Martha McKittrick, the PCOS Diva, and so on, specifically tailor exercise plans to women who need to take this condition into account. Those with certain disabilities or conditions can also stand to benefit from finding health advice online where they cannot do so in person.

Something similar happens when we look up health blogs or fitness YouTubers’ videos. In the comments section, we often see people documenting their own journey.

Finding out that others struggle in similar ways and have still attained their health goals can be very uplifting. Connecting with others online who can help keep us accountable will also keep us from diverting from our fitness goals.

So, perhaps wading the waters of virtual fitness isn’t as daunting as some make it out to be. As long as we have the right tools and follow the advice of proper professionals, there’s no reason why we cannot embrace virtual fitness.

This is a trend that’s here to stay, and it’s time we embrace it in this digital era.

How HBOT Can Help You with its Anti-aging Effects