Pizza is the most favorite dish of many people around the world. Every party is incomplete without the addition of delicious cheesy Italian pizza. Not only for eating, but many people enjoy making it at home too!

Whether you like cooking or not, you must have once tried your hand on making it at home if you are a true lover of pizza. Thus, why not learn some of the best tricks to make a perfectly delicious and luscious crusty or soft-base snacks at home.

Making pizza is not a rocket-science all you need is a little bit more attention and best-techniques to bring it to perfection. Then, next time you won’t have to rely on the restaurant to beat your hunger and to satisfy your taste buds. You can enjoy fresh, homemade, and clean pizza at home with pistachio cream spread. You should try it with different original sauces and spread of Italy that you can easily order from any Italian grocery store, according to Dona’s Kitchen. 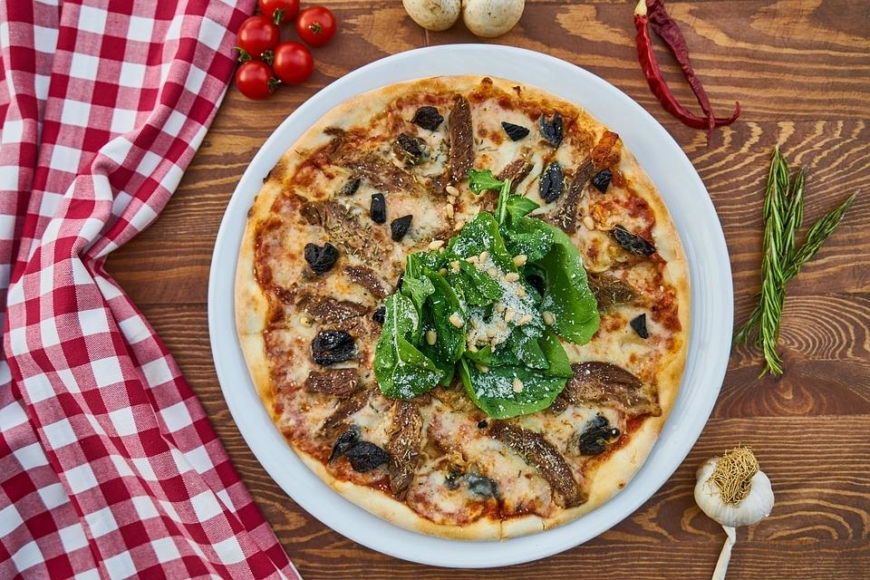 Source: pixabay.comNow, let’s quickly check out some of the best tips to make your pizza better.

The first and most important thing in the process is the preparation of the perfect dough. The main problem with this is the measuring of flour. The most common way that many people use is to measure the quantity of floor with cups that is the worst method.

The right method to make pizza bread should be based upon weight rather than volume. This is because flour is compressible. Measuring flour with a cup will give you about four ounces of flour when the cup is full. However, with the use of scale, you will always get the exactly correct amount of flour, no matter how much compressed your flour is.

If you want to make your pizza in an absolutely professional way then learn about baker’s percentages. In this, every ingredient is used by its proportion by weight to the flour. Then use the metric system and logical base-ten measure system that will add more perfection.

For example, if your pizza needs 60% water, 0.5%yeast, and 2% salt, then for every 1000 grams of flour, you need to add 600 grams of water, 5 grams of yeast, and 20 grams of salt. This is the best system that you can use to make it like a professional chef. In this way, you can scale your recipe freely without indulging in complex tablespoons and cups measurements.

The main and most important ingredient of the dough is flour and the quality of flour can change the whole game of your pizza quality and taste. You can use all-purpose flour without any issue but to get a better whole structure and chewier crumb, you need to use high protein bread flour.

Plus, also make sure that you pick the right style before making it and then start making it. For example, if you are making the snacks to feed a large number of people then consider attempting Sicilian-style square pie style to avoid any fuss.

To improve the texture and flavor of your dish, it is very important to cold ferment it after making preparation. Cold fermentation is basically storing the item in the refrigerator for some time. This process of cold fermentation really helps in giving the pizza that browning feature as the yeast then begins to digest carbohydrates.

On the Ending Note

Hope you find these tips useful and you will surely try them in your next practice. For adding better flavor, make sure to use pistachio cream spread that you can easily buy from any good Italian grocery store. And if you want to buy ingredients or want more pizza recipes, you can visit the website Italian food online store.

Wish you best of cooking!

Are you tired of applications not being what you wanted? There are plenty of such apps especially the ones which are related to food.

The „Slice“ app will allow you to instantly order real pizza, pasta, sides, and more delicious food with a few simple clicks. You will be able to browse menus, get great deals, and re-order food in an easy and convenient way.

Why choose and use this app you are wondering? The first thing and maybe the most important one is that it is easy to use. It enables you to order pizza without any effort and from any place you are at. You will be able to view menus from pizzerias near you, and you can choose a pizza that will satisfy your cravings. The checkout is instant and you can pay either with a credit card or in cash. When re-ordering, there will be no need for you to select everything again, with just one tap, you can re-order your favorite pizza.

Do you want pepperoni on one side and mushrooms on the other? That will no longer be a problem for you. One of the best things that this app has to offer is that you can literally create the perfect pizza for you. You will be able to select the size, toppings, and give special instructions to create the most delicious pizza you will eat. You can also save a lot of money by getting special promotions, discounts, and you can find the best pickup and delivery deals. One of the most interesting advantages is that you will get five dollars off your next order if you invite your friend to join the „Slice“ app community.

This application is not only good for people who enjoy eating pizza, but it is also perfect for local shops. The „Slice“ app is joining all the local pizzeria. It brings pizzerias into the digital world, which allows them to provide high-quality pizzas to their customers. Unlike other applications, that usually bring down the quality of the pizza, „Slice“, gives pizzerias a chance to prosper and it builds a true partnership.

One question might be asked though, why should you join the Slice app team? And the answer is quite simple, you will be able to get your pizzeria online. „Slice“ does not only add you menu to their application, but they will also make it easier for customers to find your pizzeria. It also has an online ordering system built specifically for pizza. It will most likely equip your shop with the latest technology so that you can provide the fastest, easiest, and the most convenient experience to your customers, which will save money and time for both you and your customers. By encouraging customers to reorder from you, „Slice“ provides your pizzeria marketing on a regular basis.

With the „Slice“ app, there will be no more need for constant clicking, low-quality pizza, and endless searching. With a few clicks, you will be able to re-order your favorite pizza, get great deals and discounts, discover new pizzerias near you, and enjoy the high-quality pizzas that you will get. With this app, you will be able to create your perfect pizza, as well as save money and time.

Dwayne Johnson is a true star on Instagram and he often posts photos of him and his family, his colleagues and directors he is working with on movie sets. More frequently he shows the world what he is doing in the gym. Besides the occasional photo shopped image of The Rock and Kevin Hart, people can also bump into cheat meals.

We all know The Rock’s meals are massive and his cheat meals are just ridiculous. The amount of food this Hollywood star can eat is extraordinary but those cheat meals do look tasty!

One of the most common cheat meals you will find on Johnson’s table is sushi. He can eat a lot and he needs a monster table to fit that laptop in there.

When he eats sushi, Johnson likes to watch something on his laptop. And yes, he calls this Sushi Train and it is quite obvious why.

It doesn’t matter whether he is at home or somewhere abroad on set, The Rock sticks to his diet. We can see him getting ready to eat sushi, this time in London.

“Eyebrows raised and chopsticks ready” is what Johnson wrote under this photo. His Sunday Sushi Train is something you should definitely try but in smaller portions.

As if all that sushi isn’t enough so The Rock has to add a couple of ham and cheese sandwiches to the mix. “If you ain’teatin’ then you ain’cheatin’. Enjoy your cheat meals my friends.” Apparently, The Rock knows the importance of the cheat meals.

The most important thing when it comes to The Rock’s cheat meals is to combine several of them. Turkey sandwich comes first and after that he likes to dip into those chocolate brownies. It is hard to decide on what looks better in this photo. We bet both are tasty.

When Dwayne Johnson cheats, he does it properly. Besides the sushi train, every now and then he spends his Sunday eating a cookie train. The cookies are made of milk, chocolate and salted caramel with peanut butter in the middle. And they are monster-sized as that fits the man like Johnson.

You can sometimes learn a lot from Dwayne Johnson’s photos (except that he eats a lot). While he was enjoying his cookies, he watched a documentary about Bob Marley and the assassination attempt made on his life in 1976. Johnson wrote:
“Bob’s son, Rohan Marley was my teammate when we played ball together down at THE U. Good times when he would share stories with us about his legendary father and their family. “Sistah, I bring the ghetto uptown.””

Dwayne Johnson seems to really enjoy his cookies. He keeps posting these photos and our mouths are watering.

The Rock can eat even when it is 1:30 a.m. A plate full of massive cookies are just a snack for him to trick the hunger.

And sometimes, the actor and the former WWE star loves to combine the two of his favorite meals – sushi and cookies.

Every true fan knows that The Rock’s favorite drink is tequila, which turns out to be perfect with pancakes.

Sometimes, Johnson has company when he enjoys his cheat meals and Eliana joined him as they prepare to get on a tower of pancakes.

Tasty as They Are

When he is eating pancakes, The Rock loves to add peanut butter and maple syrup on top, just to make them even more delicious.

He’s eating pancakes again…but this time, Johnson is watching Drug Lords and The Toys That Made Us on Netflix

Though my birthday was 3 days ago and sadly, I’ve been so insanely busy all these gifts are still unopened and sitting on the table – I’m just now able to come up for air and say THANK YOU to everyone for making it so damn special. How mean is this massive cake designed like my fav cheat meal? Love y’all and thank ya again ?? #StacksOnStacks

Dwayne was too busy for his birthday, but he had time to enjoy this pancake-looking cake!

Last but not least, Dwayne Johnson needs to listen to his strength and conditioning coach who told him: “DJ, need a mid-week carb up for your big scenes tomorrow. Eat a pizza and send me your pics in the morning” And here is your picture.

A Guide to Lawn Maintenance