The Political Correctness Police are at it again.

After this photo went viral of Idaho teachers and employees wearing costumes depicting themselves as the Border Wall and as Mexicans, the outrage police fired up the siren.

Among the many reasons this suspension is unfair: the employees were following directions. As the Idaho Press reported:

A Facebook post circulating on social media claimed that the costumes were part of a “team-building activity” among the teachers after school hours. The groups photographed were selected as winners of a contest of who could dress most accurately portraying a country based on stereotypes. Somehow this was turned immediately into politics.

The outcry cited the fact that 13% percent of the school’s student body is reportedly Hispanic, and that President Trump is currently sending troops to defend against a caravan of migrant families approaching the Mexican border.

“This type of behavior has no place in education and certainly is not tolerated here at Middleton School District. The situation is being taken very seriously. We are in full support of our Superintendent and administrative staff as a full investigation is being conducted, and we are awaiting the results of the investigation to assure appropriate disciplinary action is taken.” The statement continues with “This is an unfortunate incident of very poor judgment. Yet it is not indicative of the Middleton School District or our teachers as a whole.” 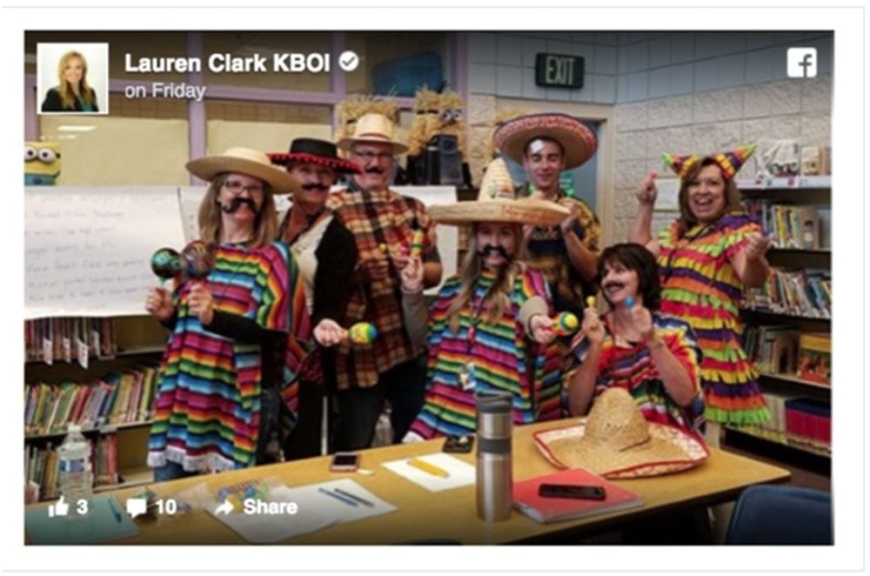 It was also reported by Superintendent Middleton that district crisis team will dispatch a member that will take over the principal duties at the moment at Middleton Heights.

Following an uproar online, Superintendent Middleton posted a video response on Facebook on Friday morning. As of this writing the video, as well as the entire district Facebook page, has been taken down. The administration section of Middleton Heights’ website is also unavailable.

“The intent or misjudgments of the individuals involved does not undo the trauma experienced by students, families and communities,” the letter reads. “The impact on these students does not stay only with them but has lasting effects beyond the school or classroom. We believe the school and classrooms have now become hostile environments that are not conducive to the education of the students.”

Blah, blah, blah, blah, blah. Our question: Can’t those 13% of students take a joke? And if adults can’t have fun on Halloween at their jobs educating young minds, where can they have any fun?

Memo to the Political Correctness Police: Get a sense of humor. Those costumes were hilarious.

Why Are Some Currencies Worth So Little?

Why We Should Buy Organic Mattresses

What Makes a Mattress Organic?