Since we can agree that North Korea bears more similarities with Asian monarchies than it does with any former Eastern European country, we must not discard the possibility of their air forces acting like Japanese kamikaze in the Second World War. During the War, Japan used kamikaze quite effectively, and although airplanes like J-5 or J-6 cannot do serious damage in combat, when equipped with bombs they would be a tremendous threat. Of course, not all of them would reach their target, but a handful would satisfy the government officials and military leaders.

As you can imagine, KPAAF which stands for the Korean People’s Army Air Force or officially as Air and Anti-Air Force Command does not appear to be among the best air forces in the world.

Nevertheless, the army of North Korea believes in their president Kim Jong-Un and his regime and would do anything for their country. If they want their country to survive, the goal of North Korean forces is to maintain Kim Jong-Un’s regime which shares more values with a Confucian monarchy than Soviet communism. In that respect, who knows what kind of extreme war tactics KPAAF would use in combat.

North Korea has obsolete planes that can still be put to good use in the hands of extremists. The Shenyang J-5 is one of the oldest and out-of-date models in their air force. More than one hundred units, 106 to be exact of this Chinese copy of the Mikoyan Gurevich MiG-17 Fresco manufactured in the 50s are expected to be in their possession. Another Chinese copy of the Mikoyan Gurevich MiG-19 Farmer, the Shenyang J-6 is also at their disposal with 97 supersonic fighters ready for combat.

Even though the J-5 and the J-6 cannot be effectively used as fighters nowadays, they could serve as a tampon zone for American missiles and South Korean airplanes. This might be the best use for these antique fighters because the ammunition for AIM-120 AMRAAM and other similar weapons is expensive and the supply is short. In case of war, J-5 and J-6 would be shot down, but they would still be responsible for the decrease in enemy’s interceptor missiles. 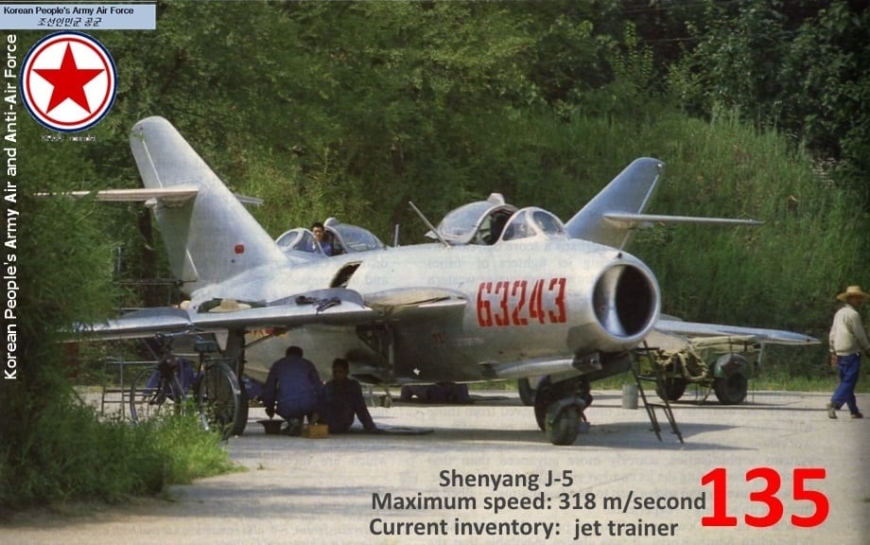 In the event of North Korea attacking South Korea, J-5 would be easily destroyed, but the allies would suffer a significant financial loss as one Patriot PAC-3 missile stands at more than three million dollars. If we take into account that those missiles are usually fired in pairs, the U.S. would be relieved of six million dollars and a set of missiles that could serve a better use in protecting the country from a more dangerous weapon- a ballistic missile. More than a million dollars would cost to fire an AMRAAM missile in air-to-air battle particularly in the case of late model AIM-120D.

Nonetheless, the U.S. and South Korea would have to defend their territory and people in case of war. Shooting the planes down would be crucial because the allies wouldn’t know if North Korea’s target is a military base, or other facilities or even civilians. Dealing with these flying bombs is even more problematic if we take into account that the plane might be equipped with some kind of chemical or biological weapon.

So, the fact remains that North Korea might approach the war as Japan did in WWII. Even though their air force is weak, with a fanatical mindset and undoubting attitude to obedience North Korea poses a serious threat.

Kim Jong Un Net Worth 2021 – Who Will Inherit the Great Fortune?

Who Will Lead North Korea After Kim Jong Un?

What’s the Cheapest a Divorce Can Cost?