D-Day or the Normandy beach invasion is the biggest seaborne invasion in history, and it was staged exactly 74 years ago. During the World War II, Nazi Germany seized control of France and most of Europe, but after few successful years at the beginning of the biggest conflict known to the world, the tides have changed.

The main goal of the invasion that was done by American and allied troops was to free France and later on to defeat Germany. Today is the 74th anniversary and we are bringing you some of the most famous quotes that were said by great people on June 6, 1944, when the landings started. 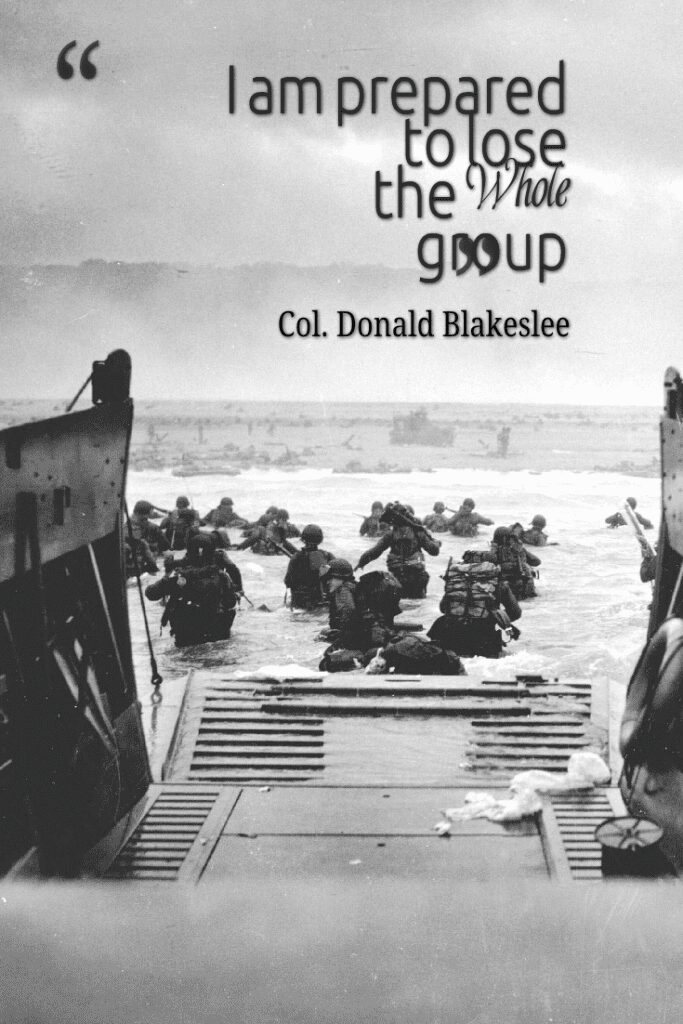 2. “God almighty, in a few short hours we will be in battle with the enemy. We do not join battle afraid. We do not ask favors or indulgence but ask that, if You will, use us as Your instrument for the right and an aid in returning peace to the world.” — Lt. Col Robert L. Wolverton, commanding officer of 3rd battalion, 506th PIR.

3. “The waiting for history to be made was the most difficult. I spent much time in prayer. Being cooped up made it worse. Like everyone else, I was seasick and the stench of vomit permeated our craft.” — Pvt Clair Galdonik, 359th Infantry Regiment, U.S. 90th Division

5. “There’s a graveyard in northern France where all the dead boys from D-Day are buried. The white crosses reach from one horizon to the other. I remember looking it over and thinking it was a forest of graves. But the rows were like this, dizzying, diagonal, perfectly straight, so after all it wasn’t a forest but an orchard of graves. Nothing to do with nature, unless you count human nature.” — Barbara Kingsolver, American novelist, essayist and poet 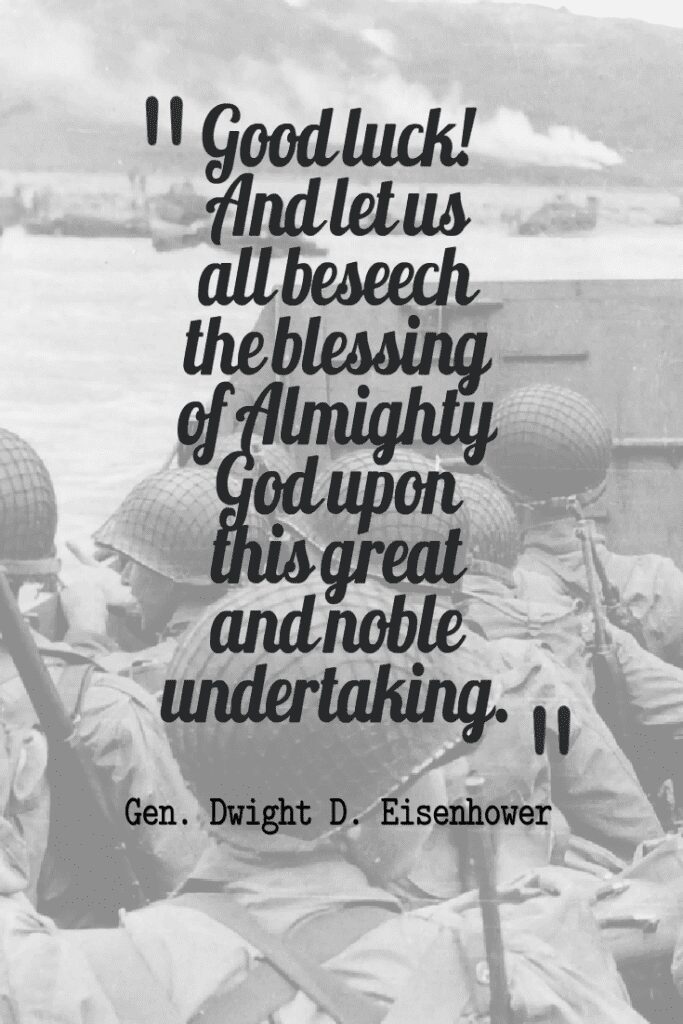 6. “Lieutenant Welsh remembered walking around among the sleeping men, and thinking to himself that ‘they had looked at and smelled death all around them all day but never even dreamed of applying the term to themselves. They hadn’t come here to fear. They hadn’t come to die. They had come to win.” — Stephen E. Ambrose, Band of Brothers: E Company, 506th Regiment, 101st Airborne from Normandy to Hitler’s Eagle’s Nest

7. “There is one great thing that you men will all be able to say after this war is over and you are home once again. You may be thankful that twenty years from now when you are sitting by the fireplace with your grandson on your knee and he asks you what you did in the great World War II, you WON’T have to cough, shift him to the other knee and say, ‘Well, your Granddaddy shoveled shit in Louisiana.’” ― General George S. Patton, Jr. to his troops on June 5, 1944

8. “It was unknowable then, but so much of the progress that would define the 20th century, on both sides of the Atlantic, came down to the battle for a slice of beach only 6 miles long and 2 miles wide.” — President Barack Obama

9. “And what a plan! This vast operation is undoubtedly the most complicated and difficult that has ever occurred.” — Winston Churchill

10. “Men, I am not a religious man and I don’t know your feelings in this matter, but I am going to ask you to pray with me for the success of the mission before us. And while we pray, let us get on our knees and not look down but up with faces raised to the sky so that we can see God and ask his blessing in what we are about to do.” 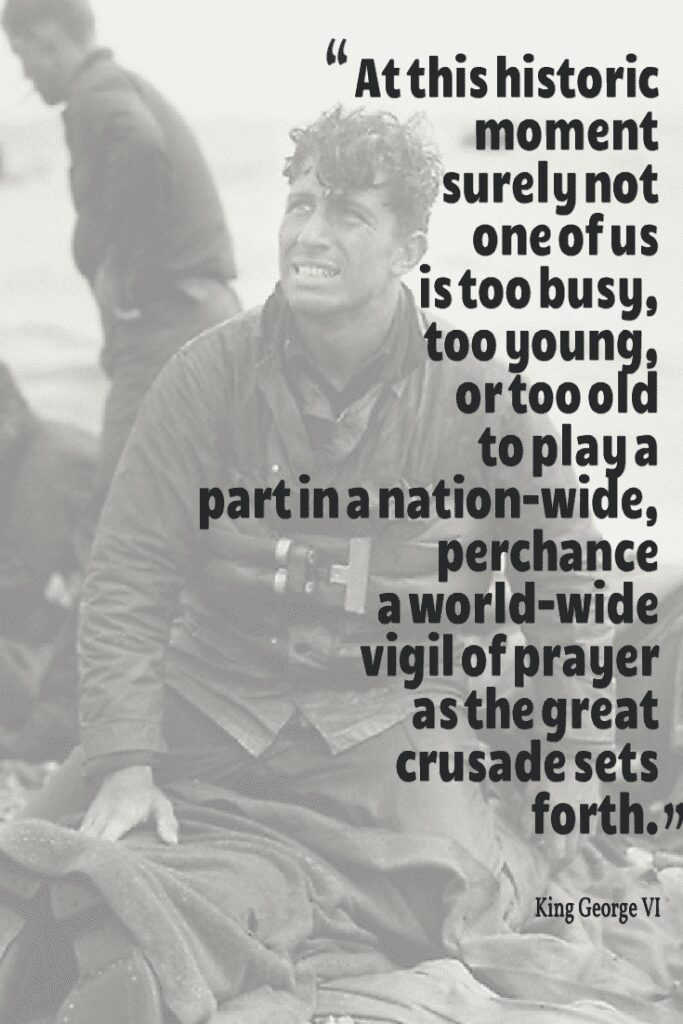 “God almighty, in a few short hours we will be in battle with the enemy. We do not join battle afraid. We do not ask favors or indulgence but ask that, if You will, use us as Your instrument for the right and an aid in returning peace to the world.”

“We do not know or seek what our fate will be. We ask only this, that if die we must, that we die as men would die, without complaining, without pleading and safe in the feeling that we have done our best for what we believed was right.”

“Oh Lord, protect our loved ones and be near us in the fire ahead and with us now as we pray to you.”

All were silent for two minutes as the men were left, each with his individual thoughts. Then the Colonel ordered, “Move out.” — Lt. Col. Robert L. Wolverton, commanding officer of 3rd battalion, 506th PIR. 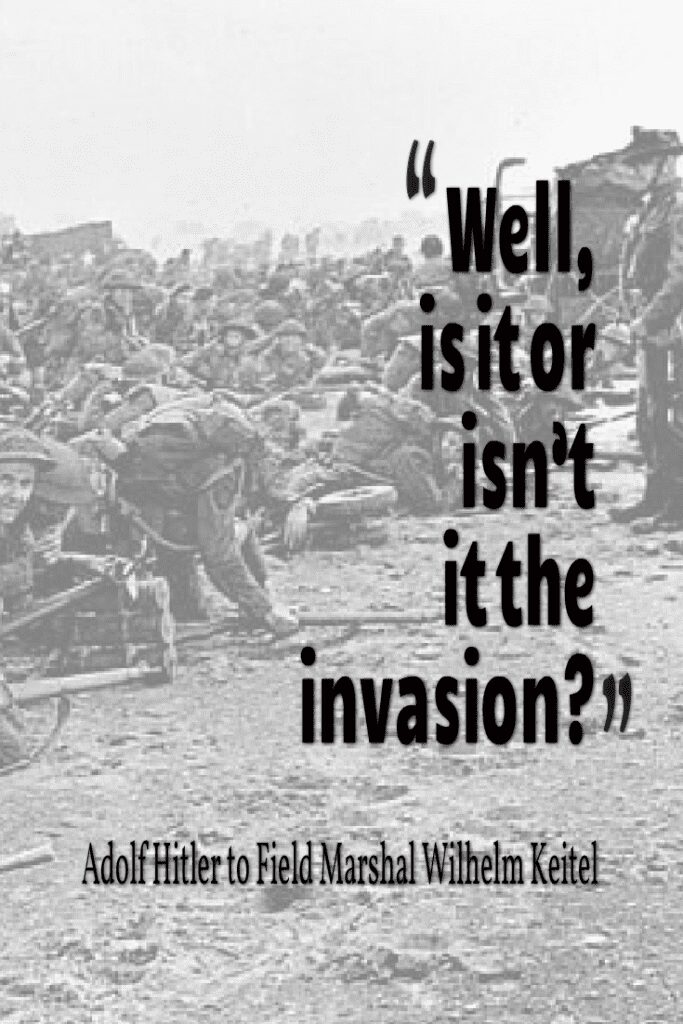 Wounds my heart with a monotonous languor.

—British Broadcasting Corporation message for French Resistance fighters, informing them that the invasion was on.

I am prepared to lose the whole group.

They’re murdering us here. Let’s move inland and get murdered.

This is a very serious business.

Soldiers, Sailors and Airmen of the Allied Expeditionary Force: You are about to embark upon the Great Crusade, toward which we have striven these many months. The eyes of the world are upon you. The hope and prayers of liberty-loving people everywhere march with you.

Your task will not be an easy one. Your enemy is well trained, well equipped and battle-hardened. He will fight savagely.

But this is the year 1944! The tide has turned! The free men of the world are marching together to victory!

I have full confidence in your courage, devotion to duty and skill in battle.

We will accept nothing less than full victory!

Good luck! And let us all beseech the blessing of Almighty God upon this great and noble undertaking.

Four years ago our nation and empire stood alone against an overwhelming enemy, with our backs to the wall. . . . Now once more a supreme test has to be faced. This time the challenge is not to fight to survive but to fight to win the final victory for the good cause. . . .

At this historic moment surely not one of us is too busy, too young, or too old to play a part in a nation-wide, perchance a world-wide vigil of prayer as the great crusade sets forth.

You get your ass on the beach. I’ll be there waiting for you and I’ll tell you what to do. There ain’t anything in this plan that is going to go right.

Well, is it or isn’t it the invasion?

— Adolf Hitler to Field Marshal Wilhelm Keitel on the afternoon of 6 June.

We shall see who fights better and who dies more easily, the German soldier faced with the destruction of his homeland or the Americans and British, who don’t even know what they are fighting for in Europe.

I took chances on D-Day that I never would have taken later in the war.

Here's our front page from June 6, 1944. Today is the 74th anniversary of the D-Day landings. https://t.co/mRjU9Y8UNE pic.twitter.com/yAhY3AV9oL

On this day in 1944, Operation Overlord, better known as D-Day started. It was the largest seaborne invasion in history. #DDay pic.twitter.com/FdudJW2dgc

On this day in 1944, Allied troops landed along a stretch of fortified coastline to fight Nazi Germany on the beaches of Normandy, France. More than 5,000 Ships and 13,000 aircraft supported the D-Day invasion. By day’s end, the Allies gained a foot-hold in Continental Europe. pic.twitter.com/G9Ks2e8har

Today marks the 74th-anniversary of D-Day when members of the #GreatestGeneration began the invasion that would eventually free Europe from tyranny during #WWII. #DDay74 pic.twitter.com/Ozh89inooj

Eisenhower while speaking to veterans in 1952 about those who died under his command on D-Day: #Walker pic.twitter.com/GkivO8nrMq

OPINION: Remembering D-Day: The day we knew we were going to win (via @FoxNewsOpinion) https://t.co/lYUoGnuqJA

Today marks 74 years since D-Day "Lest we forget" pic.twitter.com/rzMnnrKSMC

#American soldiers on their way to the Normandy beaches on D-Day on June 6, 1944.#DDay #TDIH pic.twitter.com/hrLB03yDe0

Best Places to Live for US History Buffs

Learning the History of Jamestown

Inventions That Turned the Course of History