The 25-year-old is one of the world’s leading contemporary recording artists and she has recently released her latest single. In her latest single 7 Rings, Ariana Grande sings about some of her favorite things, such as diamonds, lashes, and ATM machines. The actress-turned-singer has recently performed at Coachella and brought Nicki Minaj, N*Sync and Puff Daddy on stage with her. Rumors have been swirling that this performance brought her $8 million. This led us and her fans ask how much is her net worth.

It is estimated that Ariana Grande’s net worth is around $50 million. It is believed that during this year it will continue growing as there are many new releases, lucrative touring schedule, and endorsements set to happen this year.

Besides the clues, she gives in her latest single that he likes spending money at breakfast at Tiffany’s and on bottles of bubbles, Ariana also loves investing in real estate. Hence, she has recently bought a $16 million apartment in New York City. She briefly lived there with her former fiance Pete Davidson. Grande also spends a lot of time in her mother’s home in Boca Raton, which is worth about $2 million. 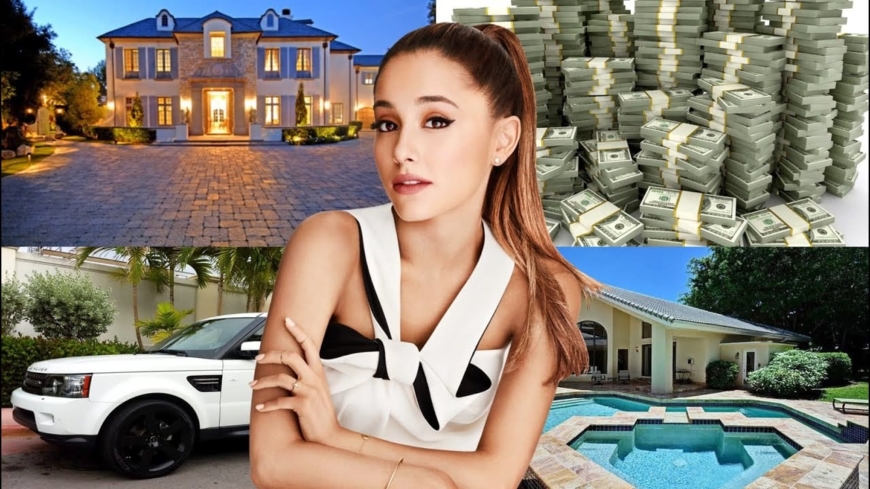 Grande also loves spending money on tattoos and she has more than 20 of them, including a crescent moon on her neck and a Spirited Away Anime character on her arm. Likewise, Ariana also has a pet collection, including her pet pig, Piggy Smallz, and nine rescue dogs.

How Does Ariana Grande Earn Her Millions?

When you read that a 25-year-old person has a net worth of around $50 million, the natural reaction is to ask how does she earn that money. Well, her net worth comes from her turn on a teen TV show, being part of the musical theatre world, and being a world-renowned pop star. She first started performing at the age 14 when she appeared in 13 the Musical on Broadway. She was part of the show Victorious, where she made $9,000 per episode. Grande also appeared in a number of other TV shows, such as Family Guy, Scream Queens, and Hairspray Live.

Then, Ariana Grande shifted her focus to music and in 2013, she released her debut album, Yours Truly. After that, she released another album, My Everything, which sold 169,000 copies in its first week. She quickly became a pop star and embarked on The Honeymoon Tour throughout America, Europe, and Asia. The eight-month tour brought in $40 million.

This was followed up with Dangerous Woman and a tour which brought her $71 million. Grande has done plenty of brand endorsements, such as ones with Reebok and Lipsy. She has released her own perfume collection, which grossed $150 million in retail sales.

Moreover, Grande has been nominated for six Grammy Awards and won three American Music Awards, including Artist of the Year in 2016, and two MTV Video Music Awards.

Ariana Grande was born on June 26, 1993, in Boca Raton, Florida and her parents are Edward Butera, a graphic designer, and Joan Grande, a businesswoman and an owner of a company that makes military communication equipment. Ariana has a brother, Frankie Grande, who is an actor and he also starred on Big Brother show.

Home » Net Worth » Ariana Grande Net Worth 2019 and How Does She Earn Her Millions?

If you type ‘greatest NBA players of all time’ in the browser, it is impossible for

Well, who doesn’t know about Burt Reynolds and his legendary and iconic appearances on a plethora

Latest from Net Worth

Tom Segura, the co-host of Your Mom’s House podcast, is one of
If you type ‘greatest NBA players of all time’ in the browser,
Well, who doesn’t know about Burt Reynolds and his legendary and iconic
Eminem is considered to be one of the most influential people in
Howard Stern is a producer, actor, and TV personality who was awarded
Go to Top